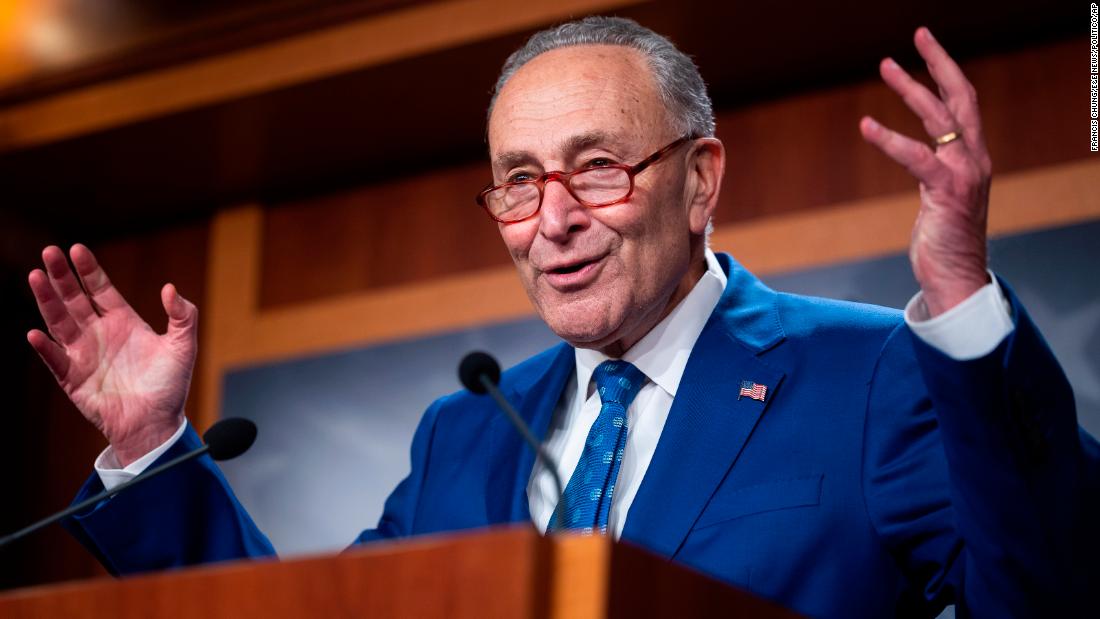 Here’s what you need to know to Get Up to Speed ​​and On with Your Day.

(You can get “5 Things You Need to Know Today” delivered to your inbox daily. Sign up here.)

The Senate on Sunday afternoon passed Democrats’ $750 billion health care, tax and climate bill, in a significant victory for President Joe Biden and his party. The final, party-line vote was 51-50, with Vice President Kamala Harris breaking the tie. The Democrat-controlled House, which is expected to take up the legislation on Friday, must approve the bill before Biden can sign it into law. The measure includes a handful of important but narrow provisions to lower prescription drug prices and extend enhanced Affordable Care Act subsidies for three years. The bill would also be the biggest climate investment in US history, slashing US greenhouse gas emissions by 40% by 2030, Senate Majority Leader Chuck Schumer’s office said. To boost revenue, the legislation would impose a 15% minimum tax on the income large corporations report to shareholders, raising $258 billion over the decade. While the deal is far smaller than the slimmed-down $1.75 trillion version the House passed in October, Democrats and the White House say the bill could still have a massive impact on many Americans.

Another wave of airline cancellations and delays was felt across the US over the weekend. More than 7,700 flights were delayed and 950 flights were canceled across the country on Sunday, according to the flight tracking website, FlightAware. This comes as global travelers are returning to the skies in droves after a pandemic-enforced pause. However, airlines and airports across the world are grappling to meet the demand. Some flight attendants say the lack of staffing, along with unpredictable schedules, is wreaking havoc on their mental and physical well-being. Plus, with fewer pilots available, some aviation experts predict these disruptions could persist for a decade as reductions in schedules and routes cause prices to rise.

At least 68 migrants arrived in New York City over the weekend on buses sent by Texas Gov. Greg Abbott. According to New York Mayor Eric Adams, some of the migrants are being “forced” on buses from Texas. However, Abbott’s office says migrants are volunteering to be bused out of his state. Abbott has designated New York as a “drop-off location for the busing strategy as part of (his) response to the Biden administration’s open border policies overwhelming Texas communities,” the governor’s office said in a statement on Friday. A fierce critic of the Biden administration’s immigration policies, Abbott began sending hundreds of migrants on buses to Washington, DC, earlier this year. More than 5,100 migrants have since arrived in Washington from Texas on more than 135 buses.

The school district in Uvalde, Texas, the site of a school massacre in May, is looking for an interim police chief as Pete Arredondo awaits his termination hearing, according to a report. Arredondo was placed on unpaid leave following his highly-criticized handling of the shooting at Robb Elementary School on May 24, in which 19 children and two teachers were killed. Officials have said Arredondo was the on-scene commander during the shooting, but the chief had disputed that, saying he did not believe he was in charge. Separately, the community’s school board president confirmed the district has zeroed in on a property to replace Robb Elementary. The community’s superintendent also reaffirmed students will not return to the campus because many are still traumatized by the violence.

A ceasefire between Israel and the Islamic Jihad militant group in Gaza is holding today after a weekend of violence left dozens of Palestinians dead. The truce, announced on Sunday evening by both sides, came about 50 hours after the escalation began, when Israel launched what it called preemptive strikes on Islamic Jihad targets in Gaza. At least 44 Palestinians, including 15 children, were killed in the violence, according to Palestinian officials. Israel maintains most of those killed in its airstrikes were militants. The escalation was the most serious in nearly 15 months, when the Israeli military and Hamas fought an 11-day war in May 2021.

This intense footage shows a group of masked men stealing more than $2 million in diamond jewelry. Watch the video here.

The mattress brand is hiring people to sleep for a living. And yes, the dress code is pajamas.

Sunday’s Seattle Storm game was the last for WNBA superstar Sue Bird. Watch some highlights from her touching send-off here.

The only pan every cook needs

It doesn’t matter if you’re an amateur foodie or a culinary genius… this piece of cookware should always be in your kitchen.

Like fine wine, these models got even better with time. Check out the stunning before and after photos taken years apart.

Actor Roger E. Mosley, best known for his role as the helicopter pilot Theodore “TC” Calvin on the 1980s hit show “Magnum, PI,” died Sunday, his daughter announced. He was 83. Mosley was injured in a car crash last week that had left him paralyzed from the shoulders down and in critical condition. Mosley starred in more than 150 episodes of “Magnum, PI” alongside Tom Selleck in the crime-adventure series, which aired for eight seasons from 1980 until 1988.

That’s the length of Google Equiano, an underwater internet cable designed to deliver high-speed broadband along the west coast of Africa. Running for thousands of miles along the bottom of the sea from Portugal to South Africa, sources say the cable could increase internet speeds more than fivefold in some countries beginning in early 2023. The project, financed by Google, intends to help close the digital divide across the continent where internet access remains highly uneven.

“She’s lucky to be alive. She has severe burns and has a long recovery ahead.”

— A source close to Anne Heche, CNN on Saturday that the actress is recovering after the car she was driving crashed into a Los Angeles home on Friday and became engulfed in flames. A representative for Heche said she Sunday she is in stable condition. Heche first rose to fame for her role in the soap opera “Another World.” She was also thrust into the media spotlight for her romantic relationship with Ellen DeGeneres in the late ’90s.

In honor of the feline holiday, watch these cats take part in an extreme cup challenge. And remember, your day is only as pawsitive as you make it. Have a great one! (Click here to view)