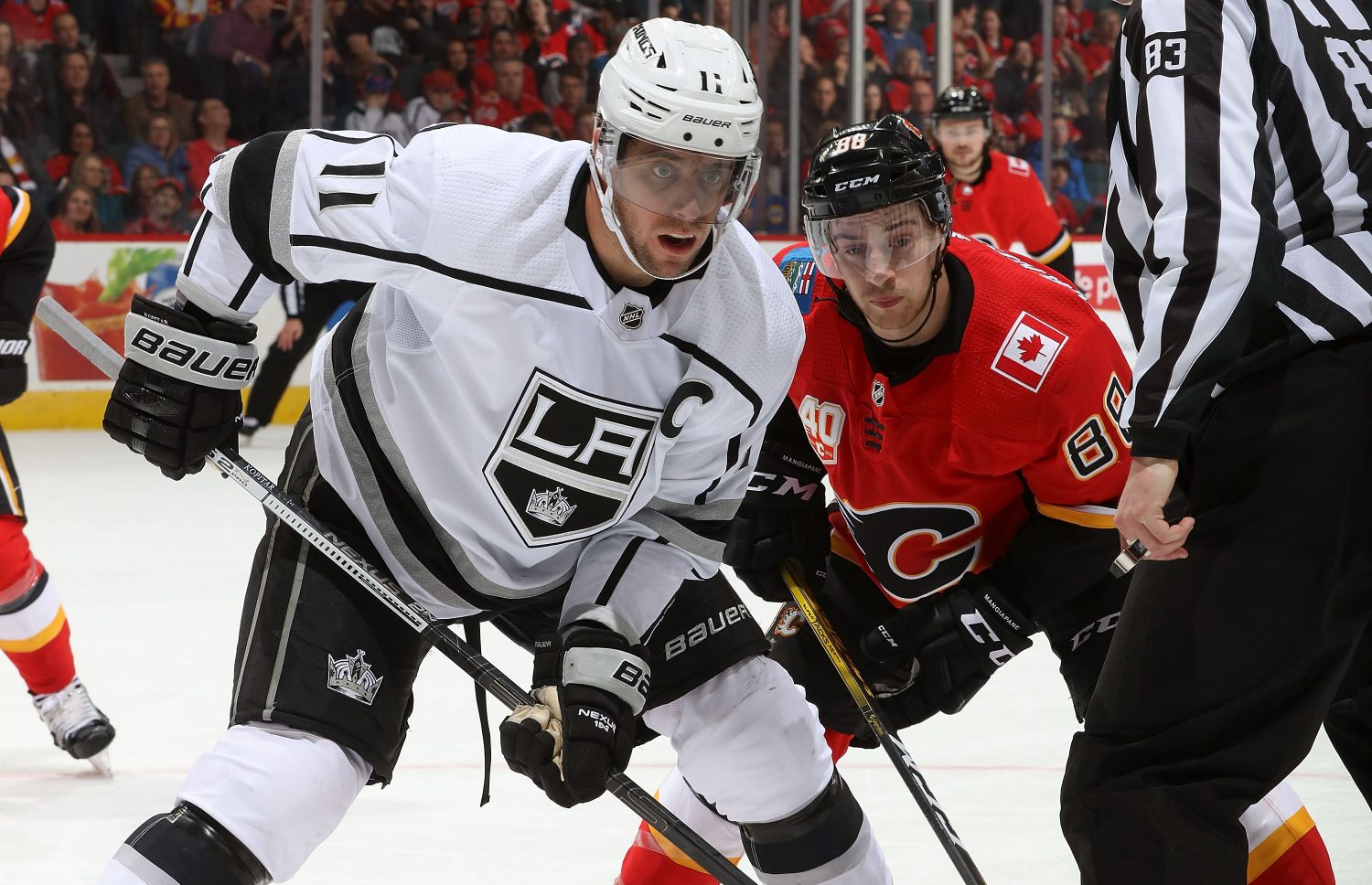 TONIGHT’S MATCHUP: The Kings are back at it again tonight, on the second half of a back-to-back set, with their first visit to Calgary this season.

HEAD-TO-HEAD: The Kings and Flames have met just once this season, with defenseman Alex Edler and forward Alex Iafallo scoring in a 3-2 Calgary win, while forward Viktor Arvidsson assisted on both goals. Edler’s 40 career points (5-35-40) versus Calgary are his most his against any NHL opponent. Calgary as three ex-Kings on their roster – Tyler Toffoli, Milan Lucic and Trevor Lewis – in addition to Head Coach Darryl Stuter.

KINGS VITALS: Following last night’s game in Edmonton, and the travel here to Calgary, the Kings did not hold a morning skate in advance of tonight’s game versus the Flames.

Goaltender Jonathan Quick got the nod yesterday evening, which points to Cal Petersen going tonight versus Calgary. Should Petersen get the nod this evening, he brings with him a 1-2-0 all-time record against the Flames, with a .924 save percentage and a 2.71 goals-against average.

Without a morning skate today, projecting tonight’s lineup is still a work in progress. The Kings opted to go with 11 forwards and seven defensemen yesterday evening, with defenseman Alex Edler returning to the lineup and forward Lias Andersson coming out. More on that below.

Here’s how the Kings lined up yesterday against Edmonton –

VITAL FLAMES: Following their ten-game winning steak in February, Calgary has traded wins and losses since, with eight wins from their past 15 games since that streak ended. The Flames have posted an 8-5-2 mark in that span, keeping themselves atop the Pacific Division, with a six-point advantage over the Kings.

Calgary goaltender Jacob Markstrom has carried the brunt of the load this season for Calgary, including each of the last four games, so we’ll assume he gets tonight’s start as well. In his career, Markstrom is 7-3-3 versus the Kings, with a .922 save percentage and a 2.66 goals-against average. Markstrom leads the NHL with nine shutouts this season and places fourth with a .925 save percentage.

Per Hailey Salvian of The Athletic, here’s how the Flames lined up last game versus Colorado –

Calgary appears to be healthy – or at least as healthy as a team can be at this time of the season – entering tonight’s game.

7/11 vs. 6/12
As noted above, and now well-documented from yesterday’s game, the Kings decided to take an approach of 11 forwards and seven defensemen last night, as opposed to the 12 forwards, six defenseman look they have utilized for much of the season.

Regarding that decision, Todd McLellan said last night that Alex Edler deserved to play and that his experience and calming presence would benefit a young group of defensemen against Edmonton. His hunch of it proved correct. McLellan also discussed what the staff felt could be a benefit of not dressing a fourth-line center, a decision that gave others the opportunity to play more.

The results of the decision were felt differently by both groups. Strictly in terms of ice time, Jacob Moverare logged just under seven minutes as the de-facto seventh defenseman. Edler played 15:36 in his return to action, the fifth-highest total on the team.

As expected, the effect on the forwards was more or less the opposite, with certain individuals gaining ice time. Adrian Kempe logged an NHL career-high 25:03 last night, leading all Kings forwards. Anze Kopitar played over 24 minutes, while Phillip Danault was above 23 minutes. Those three players were the biggest recipients of the 11/7 look.

The alignment also led to some additional ice time for a player like Quinton Byfield, who saw a couple of shifts with the Kaliyev / Grundstrom tandem, on top of his regular line. It wasn’t lost on Byfield, however, the reason for the look, which is the absence of Blake Lizotte. Byfield was quick to point out the impact that Lizotte has on the lineup when healthy as his primary focus, rather than any potential gains personally with one less center.

“It’s definitely nice having more ice, but missing Lizotte, he’s a key player for us,” Byfield said. “He usually goes out first penalty kill, he’s great on draws, penalty killing and missing him is a huge part of our team. I think we’d really like to have him back instead of just rolling with 11.”

Without a morning skate today, it remains to be seen how the Kings will roll into tonight’s game in terms of alignment.

Back-To-Backs
The Kings have been one of the NHL’s best teams this season when it comes to handling back-to-back games.

With 13 back-to-back sets already played, and tonight marking number 14, the Kings are also among the league leaders in quantity, with only Arizona and New Jersey playing more entering tonight’s game.

Via More Hockey Stats, the Kings have earned an average of 1,385 points per back-to-back game, the NHL’s third-best total behind only Tampa Bay and Colorado, which have both played fewer than 10 back-to-back sets. Those teams are, as you know, the defending Stanley Cup champions and the NHL’s first team to reach 100 points so far this season.

The standard answers when asking players about playing in these sets mostly pertain to self-care. Getting sleep as best as you can, getting the proper amount of fluids in your system, preparing the right way the morning of, especially when that back-to-back includes travel and a late arrival as a hotel, as it did yesterday evening ( or rather early this morning) getting to Calgary.

While perhaps not as defined as it once was, teams still earn fewer points, overall, with zero days rest, as opposed to 1, 2 or 3 days in between games. 18 teams have earned an average of one point or fewer in those situations this season, a greater number than with a day, or days, off between games.

Whatever the reasoning is, the Kings have found points in these settings before, though tonight’s test is certainly among the most difficult of the season, in the division-leading Flames.

Anderson-Dolan has skated in 7 NHL games with the Kings so far this season and 50 in total over the course of the last four seasons. The 22-year-old forward has been one of the top contributors at the AHL level with Ontario this season and had two assists in yesterday’s win over San Jose. On the season, Anderson-Dolan has scored 22 goals for the Reign and has 41 points from 45 games played.

Ontario Assistant Coach Chris Hajt on Anderson-Dolan
He’s been able to raise his game and he’s been consistent with it and that’s half the battle to playing at a high level for a long period of time. That gets you noticed, that draws the attention of the Kings and you never know where that takes you. He’s rounding out his offensive game, he’s been a key contributor to the power play unit that’s been so successful, but he plays a 200-foot game as well and he has an ability to play both sides of the puck and he’s just been very consistent .

For reference, here’s how the NHL defines an emergency recall situation –

We’ll have to wait and see, until closer to puck drop, regarding how Anderson-Dolan might factor into tonight’s lineup, if he does at all.

Kings and Flames, set for a 7 PM local, 6 PM Pacific puck drop tonight from the Saddledome. A preview of Monday’s LAKI Suite Night in Los Angeles, which has availability remaining through end of day tomorrow. zdooley@lakings.com if still interested.