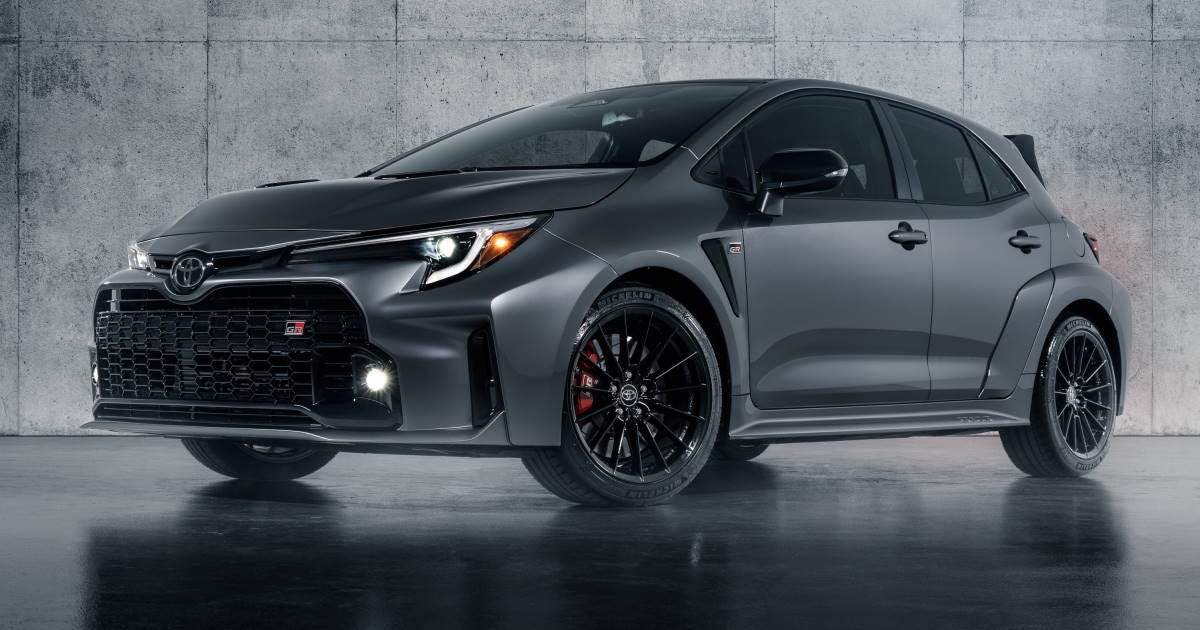 Drivers have spent months begging Toyota for a taste of the GR Yaris, but the automaker hasn’t given in yet. Instead it’s treating us to a different hot hatchback that’s, perhaps, more desirable and appropriate for our roads. Meet the freshly debuted 2023 Toyota GR Corolla and the limited-run Circuit Edition. Squeezing 300 horsepower from a tiny engine and boasting standard rally-tuned all-wheel-drive and widebody style that would make the Subaru WRX blush, the GR Corolla is set to powerslide into dealerships later this year.

The GR Corolla is powered by the same 1.6-liter, turbocharged 3-cylinder engine as the GR Yaris, but with the performance wick turned up to 300 horsepower and 273 pound-feet of torque. That’s 32 ponies and around 7 lb-ft more than its smaller sibling, which will come in handy considering the 3,249-pound GR Corolla is about 430 pounds heavier than the GR Yaris.

The G16E-GTS engine inhales via a single-scroll ball-bearing turbo and exhales through a valved exhaust system with three brushed stainless steel exhaust tips. A six-speed manual transmission with rev-matching capability is standard equipment.

At the business end of the GR Corolla’s powertrain is Toyota’s GR Four all-wheel-drive system. Designed with rallying in mind and fine-tuned by Toyota Gazoo Racing’s WRC engineers and drivers, the GR Four system features selectable power distribution. With the twist of a dial, drivers can go from a 60:40 front-to-rear torque distribution suitable for daily driving to a 50:50 split for maximum stability and on to a rear-biased 30:70 distribution for dynamic driving on back roads and circuits. Of course, these settings are baselines and the system will automatically shuffle torque distribution between the axle based on the driver’s inputs and road conditions to maximize grip.

Beyond looking stiff and muscular, Toyota hasened the Corolla’s GA-C platform with more weld points and more generous application of structural adhesive. That gives the beefed up MacPherson front and double-wishbone rear suspension a more stable platform under which to work. The GR’s springs, dampers and stabilizer bars have all been upgraded in the pursuit of circuit-tuned performance with particular attention paid to make sure the handling meshes with the AWD system’s capabilities.

The 2023 Toyota GR Corolla will be offered in two grades: the standard Core model and the limited-run Circuit Edition.

Circuit Edition examples feature a forged carbon roof that is a few ounces lighter than the standard steel top, which helps lower the hatchback’s center of mass. The forged sheet composite has a unique dappled appearance that is different from the more common woven carbon fiber. At either end, you’ll find a vented hood with a more pronounced power bulge than standard or a larger roof spoiler than the Core model.

Toyota’s Heavy Metal satin finish paint is exclusive to the Circuit Edition — which can also be had in white or Supersonic Red hues — as are red-painted brake calipers with GR logos. The cockpit is home to suede-trimmed sport seats with red accents. And perhaps the most desirable Circuit Edition launch year exclusive for Toyota-phile collectors is a shift knob signed by Morizo ​​aka Toyota master driver and president Akio Toyoda.

The GR Corolla comes standard with an 8-inch version of Toyota’s Audio Multimedia infotainment. The Circuit Edition rolls in standard JBL premium audio, navigation and Qi-compatible wireless phone charging, but the Core grade can also be so-upgraded with a Technology package. Either way, Android Auto and Apple CarPlay are standard with wireless connectivity, as are Amazon Alexa compatibility and the automaker’s “Hey Toyota” hotword voice command and search.

Pricing for the GR Corolla and its Performance, Technology and Cold Weather packages has not yet been announced. I estimate that it’ll start around $37,000 — based on the GR Yaris’ price and leaving a fair bit of breathing room beneath the GR Supra’s MSRP — with the Circuit Edition going for around five grand more. We’ll soon know how educated a guess that is with more details emerging as we approach the launch later this year.

With the Subaru WRX STI on hiatus, the 2023 Toyota GR Corolla will square up against the all-wheel-driven VW Golf R and front-driven competition from the Hyundai Elantra N and the upcoming eleventh-gen Honda Civic Type R.


Get the Roadshow newsletter

See the latest cars and automotive trends from supercars to SUVs. Delivered Tuesdays and Thursdays.